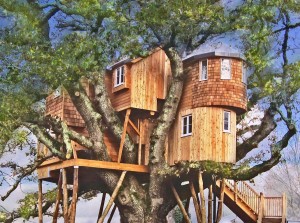 Ralph’s dad built him a treehouse in their backyard. It was impossibly high, at least four times as high up as I could reach. And it was huge, elaborate, the stuff of 8 year old boy’s dreams. At least, that’s how the boy remembers it. Planks were nailed into the trunk as steps.

“Can I come up and play” I pleaded.

“What’s the password” thundered down from on high. I had no idea. I tried a few feeble suggestions.

“No, that’s not it, this is only for club members.”

I was desperate enough to humiliate myself, so I begged. “How do I become a club member?”

“I decide who is in and who is out. And you are out” was his stern reply. Don’t get the wrong idea. Ralph wasn’t like that most of the time. Most days I was in the club. It was Ralph’s treehouse after all. But it sucked to not be in control and never be sure what I had to do to be on the inside.

And then we grow up. And treehouses become far more sophisticated. We are always building clubs to belong to, that exclude people who we decide aren’t right. We get really clever at the rules, so they feel like they are right, that they should be there, because they’ve always been there, that’s how (our version of) reality works.

I belong to a community of sorts, of broken men, men who have failed and stuffed up and acknowledged it and have often felt outside the clubs they came from. Or have suffered watching other people be pushed to the margins. Which sucks. So, when my community of men find belonging around a set of common values, experienced through a shared experience of sacred ritual, we finally feel like we are on the inside. We know the password. It’s secret. And you won’t ever be told what the secret is. You have to work it out for yourself.

Which is nuts. Because my community of men learn through our shared set of values that everyone is in, unless they exclude themselves. We know that how we chose to build a treehouse is not the best, right or only way. There are lots of treehouses. Just because our treehouse is down in the roots while lots of others are up in the branches doesn’t make ours better. Men don’t have to join our treehouse to find out the secret truth.

Recently, a friend of mine was talking with a woman about the things that go on in ‘our treehouse’ and she answered that she thought it might be a bit weird, new age, universalist, Buddhist, she wasn’t sure she agreed with it. In other words, she didn’t know the password. Wwhen people say those kinds of things to me, I want to get on my high horse and prove to them I am right and they are ignorant. But he didn’t. He said (and this is such beautiful wisdom) “thank you for your perspective, I appreciate that.”

My immediate internal reaction is “but she will go away thinking she is in and you are out, she is right and you are wrong, and that puts her in control, and that’s scary and you will lose.” Hello false self, always wanting to be in control.

But my second reaction to his generous response is YES! This is what the clubhouse of wisdom looks like. It welcomes everyone and appreciates everything. In other words, it is not attached to a password. It always empowers. It gives power to the other person, it puts them in charge of my treehouse. And they can knock my treehouse down. Ridicule it. Because it’s built on a true foundation, it invites humiliation. In fact, that’s what it is there for, so everyone can belong.

Jesus knew this when he was confronted by a woman whose daughter was suffering terribly. She shouted, pleading him to help. He ignored her, because she didn’t know the password. She didn’t belong in his treehouse. The disciples knew it and told Jesus to send her away. But she didn’t give up. So he responded by saying “woman, why would I throw the food that is meant for those belonging to the ‘in crowd’ to the dogs? (my paraphrase). Pause for a moment. Jesus called a woman a dog because she wasn’t in the Israelite treehouse. Yes, he really did. Plain and simple, offended her as violently as anyone could.

Too violently, in fact. He was calling out the sham of religion and naming it. Once the word “dog” is out you can hear the room go quiet. Oh dear, Jesus has just gone too far, they would’ve been thinking. We are more sophisticated than that. Let’s just say she’s creating a stir, she’s a trouble maker, she needs to learn her place. That’s what Jesus was exposing, that’s what he was naming, all the polite, superior jargon we throw over the naked, ugly fact of exclusion.

Her response must have flummoxed the audience. “Even the dogs eat the crumbs that fall from the table.” Gotcha. She knew the password. It was non retaliation. It was absolute humility. It was about not belonging and not caring about the stupid rules people make up and not caring what anyone said. Love for her daughter would plough through the nonsense.

Zen Buddhist monks have an stick, called a keisaku, that is struck between the shoulder blades to assist those praying to stay awake or present. Although the one struck requests it, they do not know when it will come. This keeps them present. It is not considered a punishment but a compassionate invitation. To be offended would be to engage the false self and thus engage with its misery. This is in essence what Jesus was doing. In one fell swoop, he rips the carpet out from under the Jewish treehouse and shames it’s exclusivism, and he reveals someone who is not a Jew and not a man as a bona fide member of the treehouse of God. Because love made her poor, and poverty made her rich.

You might be reading this thinking “didn’t Jesus say that he was the only way to Heaven, and that everyone who doesn’t accept him is out?” Sadly, that’s how his words are often interpreted, as armoured cladding to keep ‘those people’ out. But that’s not at all what he meant. His wisdom, his teaching, his way – it is the only way, but it’s not his exclusively. All truth is God’s no matter what the source. Which might threaten some people. You might want to disagree with me. That’s ok. I used to disagree with me too. I still do sometimes. But I’m coming around to choosing  inclusion over exclusion. Not universalism, because truth is truth.

I’m so tempted to believe my club’s treehouse is the best. To champion it’s merits, to tell every man that he won’t find solace until he joins. It’s what I used to do, in the name of God. To be the evangelist I was told I should be so that others can join the best club and live forever in the best treehouse. But in so doing, I inadvertently trashed theirs. Or at least built mine above theirs in the tree, a little closer to heaven. And that’s lonely and more than a bit tiresome. So I think I’d prefer to abandon the reputation of my club and it’s treehouse, like Jesus did his. And trust God with the results.