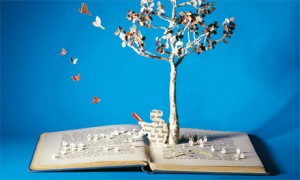 I confess that I dreamed of being a football commentator as an adolescent. Perhaps I love the sound of my own voice, because I became a preacher. But it was never the facts of what I was sharing – it was the drama that mattered. I think I am more drawn to storytelling.

Which made for a joyful end of day for myself and my sons. I read to each of them every night I could – or made up stories. I’m not bragging here – this was a delight for both of us. And recent research has discovered that there is a distinct advantage to fathers reading to their children.

The research, published by Elizabeth Duursma, senior lecturer for early childhood literacy at the University of Wollongong, has found that fathers stimulate the thinking of children very differently than mothers. A mother might invite a child to count the number of rungs on a ladder in a picture book, whereas the father would be more likely to invite the child to remember the last time they saw dad up a ladder and ask what he was doing.

However, mothers are fifty percent more likely to read to their children than dads, according to the Booktrust in the UK. Dads tend to think it’s a mother’s task, not realising that it has always been the role of the male elders to tell stories, going back millennia. Men are busy during the day and tend to focus on tasks, so story time at day’s end fosters the strongest sense of relational intimacy that a child might experience with their father.

John Gutenberg’s printing press in 1440 – regarded as the most important invention of the second millennium – accelerated the number of stories we hear in a lifetime from a few dozen to hundreds. The advent of radio and TV increased that to hundreds a year. This shows how profoundly we lean into story for meaning and context – but also allows us to become passive in the process, which loses most of its impact. Ever seen a movie as good as it’s book? It wasn’t a very good book, if that is so!

Civilisation is founded upon an oral tradition. The fire would flicker, the shadows would dance and the family would gather to hear stories that gave meaning to life. Australia’s original custodians still hold the tradition of dreamtime in many communities, where everything has a role, an origin, and mythical dimension that deepens life by dimension.

Completing a Masters in Counselling a few years ago required a lot of reading, and I was reminded afresh how we have moved away from story, toward more academic, non-fiction forms of literature. It was reading Jewish existential therapist Irvin Yalom’s wonderful “Creatures of a Day” – where he recalls sessions with clients over a lifetime of work – that I was struck how my professional practice is more informed by story more than the scientific, didactic approach of most western education.

This is especially true in the role of ethics, where I have lectured. In his book Clinical Ethics and the Role of Stories, Richard Zaner says “there is a power in narrative which is plainly unmatched by any other, and it is …. when done rightly, the only way to tell that ‘monumentally elusive tale.'” Elusive. It is not accessed by the ordinary, surface comprehension, that is only interested in the ‘what.’ Zaner quotes Barry Lopez, who said that we need stories more than food to stay alive. “Stories have a roaring power, stories are the most crucial and necessary food, how come we never hardly say that out loud?”

As EMRI machines are revealing, the parts of our brain that light up in story impact us in ways that shape our thalamus – our reality processor – to see in terms of possibility and value and worth and depth of meaning, that animate our very existence. Research conducted at Princeton University’s Hasson Lab has shown that reading stories is a primary way to wire up a child’s brain for thoughts, ideas, emotions and values – and that a child will intuit what comes next in a story with uncanny acuity – before they hear what comes next.

Wonder opens up parts of the brain for a big universe filled with splendour. Australian Cartoonist Michael Leunig says that as a child he thought there were pixies in his garden. He saw their silver trails glinting in the morning sunlight, the wake of rummaging in the lettuces, the holes dug in the damp soil overnight. Now, as an older man, he KNOWS there are pixies in his garden. Why is the movement of nocturnal creatures not enchanted? If we do not live in an enchanted universe, then we live only with conclusions, a closed set of facts that act as a restricting brace on the dance of our souls.

The power of story is not only in the story, or even in the telling. It is in the dance between the storyteller and the audience. There is physical proximity – the warmth of connection, Buber’s “all living is meeting.” Reception to the story opens us up to vulnerability. We weep as the hunchback of Notre Dame is beaten. We ache as Hazel dies in Watership Down. Our imagination dances in the spaces between the words spoken, filling in the unseen world with our own possibilities. Some of the most popular stories were written only for the immediate family of the author. Tolkien’s masterpieces. William Paul Young’s The Shack. My many never to be published instant creations.

So read, I say. Find a child you can read to, a nephew or niece, child or grandchild. Read aloud. Read with verve. Lose yourself in the joy of story.

I leave you with a shortlist of my favourite all time children’s storybooks.

For older children:
Magpie Island by Colin Thiele; bittersweet, haunting and raw
The Twits by Roald Dahl (or anything by him; he is a genius at understanding children)
A thousand other books I cannot list right now