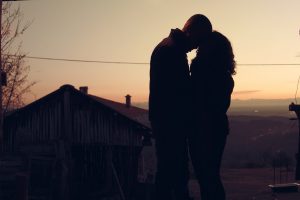 Recently, I saw a video of a panel of men responding to questions from women about what men wished women knew. At the end, a woman asked “why is my husband so crazy about sex?”

One man on the panel gave the most insightful answer I have ever heard on the topic. He said “your husband isn’t crazy about sex. He’s crazy about safe touch. It’s just that he knows no other way of getting safe touch from you.”

This is breathtaking insight into the plight of western men and touch (in the East, men hold hands and walk around in public arm in arm – they don’t seem to have our inhibitions). There are four problems with men and physical touch. I’ll start with a hypothetical story about Fred.

1. Fred stopped getting safe touch from anyone at around age 8.

Fred feels awkward around his mates if mum kisses or hugs him so he learns that he is not allowed to want it very often. Dad starts shaking his hand around this time, because apparently that’s what men do. His mates would never hug him because that’s gay (and gay is still bad). And he doesn’t want his siblings to hug him because that’s plain weird. He watches his sisters get lots of physical affection and craves it but doesn’t know how to ask for it – and after a while, he learns to shut down his awareness of his hunger for it, but his body never stops aching for it. This is starting to change, but with so many absent dads, the problem is still chronic.

The Australian Royal Commission into childhood sexual abuse is long overdue and a godsend in helping victims tell their stories, be validated for the trauma they have carried, and in some cases, find compensation. However, this amplifies the problem that exists in step 1: Safe touch from men is considered an oxymoron. Male early childhood and primary school teachers are not allowed to touch any student, no matter how distressed they might be. The school cannot get insurance if there are not water tight policies in place to protect everyone. So Fred who just grazed his knee can sit on the knee of a female teacher but never a male teacher. The message to society is very clear: Men are not safe in and with their bodies. Also, there’s a one in five chance that Fred was molested by an older male. That makes him crave touch all the more and fear it at the same time. Trauma is a slippery pain that is stuck in the body.

This may be awkward to read, but it’s a simple biological fact that a male’s arousal is fast and close to the surface, and external to their bodies. Fred’s now pubescent body responds with delight to safe touch, and sometimes that might trigger arousal. This sets Fred (and every male) up for a world of confusion, in his mind fusing arousal to the need for sex. Arousal is like a wave in the ocean; it rises, it peaks, and on its own, falls (ahem, quite literally). But this has nothing to do with sex but everything to do with being male, having a truckload of testosterone and having a body that so spontaneously responds to warmth with delight.

Fred meets a lovely girl (or guy). He gets quite besotted. They hold hands (touch! for the first time in years). They hug, eventually they kiss. He is in heaven, and of course because of the way the system has set him up and the society he lives in, he immediately thinks about one thing: Sex. But it isn’t sex he wants, not even now. He wants what immediately follows sex: Calm, relaxed holding, soft touch, feeling safe in his own body. He’s attached safe touch to sex.

When working with couples, I’ve often put the woman in charge of initiating sex and told the man to stop asking for it and to not interpret her reluctance as a rejection of him. She can’t get aroused when she has to service his need for sex, and he can’t get connection even if she does, because it’s mercy sex, which is little better than milking a cow for both parties!

The object of desire may be intercourse, but the object cause of that desire is the inability to get it. Oddly, the barrier is fuelling the craving. He doesn’t want sex, he wants it refused! If he could get sex any time he wants it, he will get bored with it very quickly (you may struggle to believe that, but it’s true). Teaching him to honour desire as a gift and to separate it from sex is the first step to re-introducing him to safe touch.

The first and safest (yet still scary) step for men is to find safe touch with their mates. In my men’s group, we hug. We hug long and well. And it now a natural and wonderful part of my life.

I’m not alone in my skin hunger. This is one rare way western men are starving. I accept men with ASD might become like a shop mannaquin when hugged, but that’s because the signals they are receiving are so powerful they don’t know how to process them. We are embodied creatures. Our desires for touch are sacred and profound and will not be denied, or we will suffer terribly. It is a tactile form of loneliness that can engulf a man.

How will you reclaim safe touch for men, for yourself? How can our society see men as intrinsically safe for everyone? How can we distinguish between the need for touch and the desire for intimacy?

What might our world look like where touch is validated, expressed, received, welcome? Perhaps the violence that has marked male-driven culture might ease as we learn to be gentle with ourselves and each other.