Roos In His Top Paddock 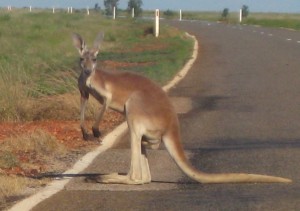 My eldest son and I drove out of Broken Hill after scoffing down a pizza and headed east. The light was good, despite the clock reading 6.30pm. So good, in fact, that it felt like mid afternoon. The sky was clear and dessicatingly hot, hovering in the mid 40s. Our destination for the night, Cobar, was some 450km away, over four hours’ drive, but the road good and the drive easy.

Locals might have warned me. About 30 minutes out of Broken Hill, an oncoming car prevented me from swerving around a large mop of fur and blood on my side of the road. Big red roadkill. Our little Astra dragged its sump sickeningly over the rotting carcass. “You could’ve slowed down!” my son shot back at me. He was right. But I had the pedal to the metal for a reason. That beast was a portent of the night ahead. I wanted as many kilometres behind us as possible before night fell.

The light held surprisingly long. I watched the last beams fall over the horizon in my rear view mirror at around 8pm, as we were nearing the dot on the map that is Wilcannia. This once bustling port town is now a ghost town, with nowhere suitable to set down for the night. So on we drove.

Less than five minutes out of town, the trouble started. My son played spotter. He’d say right or left, as soon as he saw one. Very soon, he was pointing out big red kangaroos like a Gatling gun. We slowed to 100kph. 90kph. 80kph. It still felt terrifying, wondering which lunatic would play chicken with us, using it’s lumbering mass to destroy our vehicle.

Coastal dwellers who have never ventured into the outback don’t understand the threat. A big red kangaroo can measure two metres tall and weigh over 90kg. By late 2014, there were an estimated four to five million big reds in western NSW, an increase of a million every year since 2011, when the drought broke. Now the drought has returned, the roadside is their fast food, the soft green shoots as tempting as the golden arches to a hungry adolescent. I would believe it.

At one point, I slammed on the brakes and stopped inches before one of these hopping lunatics. We sat there in the middle of the highway as this creature kept hopping back and forth in front of us. Later, I hit one, at low speed. It fell to the road, and got back up and hobbled into the bushes. Our speed now a relative crawl, I was gladdened to see a road train come up behind me and overtake. He had nothing to fear. We snuck in behind him and tried to keep up, leaving no gap between us where a roo could jump. At 115kph in the middle of the night with kangaroos inches from your car and a massive truck mere feet in front of you, you become hyper-vigilant. Every nerve in my body was strained. Once, the truck hit a roo. I had no time to swerve. Once again, our car dragged its sorry sump over the fresh kill.

Then the road train pulled over for a rest, and we were on our own again. Finally, at 11pm, utterly spent, we reached Cobar. I fell into bed and slept the sleep of gods. Early the next morning, I rose, opened the motel room door and was ambushed by an unholy stench of rotting flesh coming from our car. The inkeeper sat in the searing sun watching me. “You shouldn’t be driving that road at night” he dryly advised. “It’s not safe.” Something about country folk stating the bleeding obvious.

Alcoholics Anonymous have a saying that if you have an idea after 10pm, it’s probably a bad idea. This doesn’t only apply to addicts; anyone who has suffered with depression or anxiety knows how the night can bring out stinking thinking. Those in grief, too, are met with the darkest shadows when others are blissfully slumbering. Like roos bouncing around uncontrollably on an outback road, thoughts jump into the mind that are exhausting to dodge.

From the sixth century, Benedictine monks have risen in the watches of the night to intercede for those of us who have known such tremors of the night. Their founder, Benedict of Nursia, implemented the Rule of St Benedict, which involved praying publicly seven times a day, seven days a week. The cultural impact of this way was so profound that Benedict is often regarded as the founding architect of contemporary Western civilization. Through him a rhythm of work, rest and continual prayer became the heartbeat of an entire continent. For those whom dark fears would arouse from slumber, they could rest in the knowledge that somewhere, a monk was praying for them.

Prayer is a way not of staying vigilant with fearful, fretful angst (as I have so often seen it expressed), but slowing everything down. Of returning to the place of rest, security. If we live life at 110kph, we will get into trouble when night falls. If we do not plan to rest at dark, our lives will unravel. Psalm 63 expresses it like this:

“On my bed I remember you;
I think of you through the watches of the night.
Because you are my help,
I sing in the shadow of your wings.
I cling to you;
your right hand upholds me”

Our bodies were not designed for the technological distractions with which we have surrounded ourselves. Unless we return to a rhythm of rest, work and prayer, there will be roos in our top paddock.

I must keep reminding myself to slow it down. To build again a ritual around bed time. To drink no caffeine after 5pm. To limit my sugar intake late at night., stay off the computer, and turn off my phone. To find a point of quiet beauty to meditate. To simply breathe. To watch myself breathing, like a child at rest.

Whatever nonsense bounces around in our heads late at night. it is only in the full light of day that we recognise how stinking our thinking really can be. The carcasses of our vain imaginings will be rotting in the hidden undersides of our souls. Shame can be a blanket that unnecessarily alienates a person from full participation. Daylight is the time to travel. Perhaps like Peter you need a foot bath, but nothing more. Whatever thoughts befall you, they are no more you (nor any more rational) than the countless big reds I could not control.