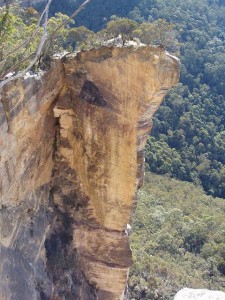 We sped down the fire trails on our mountain bikes, helter skelter – though with my ageing knees, it was more just helter. At the end of the trail we came upon sheer cliffs that rose from a sunken valley almost a thousand metres below. Cycling around these sheer cliffs, we came upon Hanging Rock, not the Victorian landmark made famous by literature and film, but a less known but far more spectacular pillar of vaulting sandstone in the Blue Mountains. Hanging Rock hangs perilously off the surrounding cliff face and plummets hundreds of vertical metres on all sides. It is separated from the surrounding landscape by a slivering abyss barely a metre wide but impossibly deep. To get to it, you must take one comfortable leap. But to stumble would be instant death.

My three mates leapt across the divide and danced around Hanging Rock with the abandon of boys. I hesitated. I faltered. I stayed behind. Paralysed by vertigo, and then shot through with emasculating messages from childhood, I withered in my incapacity. Missing a testicle, Fay? What are you McFly, chicken? No amount of internal cajouling could empower me out of my frozen state and across that gulf. I could not do it. I had been here so often before, and have been since. The humiliation of not being ‘good/strong/manly/brave/etc enough.’

In my early years of faith, I became familiar with a tract called “The Bridge” which pictured the cross of Christ as providing a bridge across the divide between sinful, fallen me and sinless, holy God. There was nothing I could do to close the gap, so God made a way in Christ. It was a simple metaphor, but it worked to a fashion. But as I have aged, I have found it to be entirely unhelpful.

Once my friends had played on the pillar of rock and my fear had pilloried me with pitiful pain, they returned to where I was, unaware of my inner travail. But they could not stay out there. Bravado gave them fleeting fancy, but no lasting reward, like so many people who climb a ladder to the top, only to find it leaning against the wrong building. Jesus made friends with those who seemed to struggle to take a single step on that ladder. Told them that life is found at the bottom.

Our experience of separation tells us that we must cross the abyss. We must ‘do’. We cannot imagine an unearned acceptance, a holiness that is birthed, reared and matured in poverty. While we look upon God as perfect, he (she) makes no such distinctions. Here’s where the “Christ bridge” metaphor is so terribly unhelpful. While we crave glory, he rests in humiliation. It is this side of the divide where God has chosen to make his home. Even, scandalously, within our brokeness. We have imagined a glory that must be achieved. He revels precisely where we are repelled. While we were scrambling to be like God – or hope that Jesus would do it for us, he was abandoned to becoming human, even human refuse.

It was only as I welcomed (again) the humiliation that I was once again at peace and at home. There was nothing to be done. To be a happy sinner in the hands of an unclean God, the both of us deliriously poor. It is my poverty that invites me in. It is not the sinless Jesus who appeases the demands of a holy God and satisfies his wrath. No, it is Christ showing us God as a lover and a fool. Now sitting with leper Richard and having a picnic.

It is here where I am enlarged by being little, at home in obscurity, and ultimately, only victorious in death. What a different gospel I have failed into! What freedom is found in subtraction!

The innocent do not know they are innocent. Think about that for a moment. Initial innocence is freedom from all concept of comparison and competition. It is unearned and unmediated presence. We start there, but we cannot stay there. But we can, at long last, return there. Second innocence, then, can only come as we unshackle ourselves from performing and critiquing. And it seems to me that this cannot be done but through a total failure of the ego. Perhaps it is not surprising that we projected ego onto God, declared his offence for him, not seeing how we had labelled him with our own sad insecurity.

“Only that now you have taught me (but how late) my lack.
I see the chasm. And everything you are was making
My heart into a bridge by which I might get back
From exile, and grow man. And now the bridge is breaking.

For this I bless you as the ruin falls. The pains
You give me are more precious than all other gains.”
– C.S. Lewis, As The Ruin Falls