(This is part one of a three part reflection by Kent, an initiated man, on his experience of the Men’s Rites of Passage. This may be helpful for any man considering the rites with apprehension, uncertainty or anxiety, which is very common.) 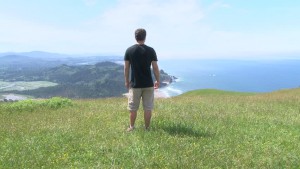 Money.
An education.
A career.
A beautiful wife.
A growing family.
A large home.
A thriving business.
Community respect.

To all who saw me,
I had unlimited prospects.

And I was dying.

Not physically.
But inside.

Slowly and carefully.
Hidden from view.
I was gradually being hollowed out.
I was working hard.
I was popular and admired.
I did the smiling thing.
I made pretending an art form.

I actually believed it.

I was 42.
After decades of climbing the career ladder and making my place in the world,
I had stopped looking at myself in the mirror.
I avoided my own gaze.
When I did I could see through my eyes into my inner self.
I knew I was a fake.
A fraud.
And I hated it.

And while everyone else around me was fooled.
I knew I was dying.
There was no place left to go.
And quietly,
in the honest moments when I was alone,
I knew I couldn’t go on much further.

So I did what I knew best.
What the world told me to do.
I worked harder.
I ignored my inner self
and concentrated on my outer life.
I avoided facing the truth.
Convinced myself I was OK.
And lied to myself to keep living the lie.

As the world inside me became depleted and crumbled,
My outer world began to follow.
It was not living, it was an existence.

And then,
in one of those brief moments of rightness
that creeps up on you unannounced and unprepared for,
this ordinary man popped his head around my doorway at work and said:
“Are you O.K.?”

“Yes, I’m fine.” the reply sprang forth without my control.
How automatic was this lie to me now?
“Well if you need a chat, let me know.”
“Will do.” I replied.

I vaguely knew this man, a parent of one of my students.
I knew he and his family were facing some difficult issues at the time.
My false self immediately knew I was in a far better place than he and,
in my arrogance and ignorance, decided that “I” could help him.
After all,
I was a leader and a strong person.
Why wouldn’t he want and need my guidance?
It was my place to fix him.
Solve his problems.
Show the world I am still on my game.
It was what I do.

We had coffee a few times.
I invited him and his family over to my home to see how a ‘stable and normal’ family was.
I felt the need to fix his problems.
What better way to prove to myself I was OK.

As we got to know each other,
He shared with me a story of what was happening in his life.
He had recently done a thing called ‘Men’s Rites Of Passage’.
He shared about it briefly.
He couldn’t say much about it,
but told me that doing it had helped him,
both personally and in his family circumstances.

Hearing these words made me angry.
I didn’t know why.
The whole thing sounded hokey.
What a stupid way to try to solve your problems.
I imagined a bunch of men running through forests.
War-painted and wild.
How pathetic.

But as he told me,
I could see it in his eyes that something was different.
He said doing the MROP hadn’t fixed his present circumstances,
but changed him.
He was now in a better place to face his own life.
He had found connection.
He had found brothers.
He was moving forward.

And then he said:
“And I think YOU need to do the rites as well.”

I shut down.
I smiled.
Gave him some feeble excuse.
Cut short our discussion.
Went away fuming.
He had hit a nerve.
He had broken through my well-varnished and hardened shell.
$#&*@!!

I avoided him for a long while.
This was not appropriate.
How dare he assume I needed something to fix ME!?!
This was a cult wasn’t it?
It had to be.
Was it?
Is it?

And yet,
as the weeks went by,
his simple, caring gesture resonated deep within.
It did something to me which had to find it’s way through my pain and loneliness and pride and hurt and anger.
It found it’s way into my spirit.
As frightening as it all seemed,
it brought deep within me something I had lost and unknowingly yearned for for many many years.

It gave me hope.

I didn’t understand it.
I didnt want it.
I didn’t want to admit it.

And yet,
in my innermost being,
I knew he was right.

I didn’t even know really what the MROP was.
What it all entailed.
What it did for you.
All I knew was…
I have to do this.

I rang him up the next day,
close to tears.
“I think I need to do this MROP thing.” I said with uncertainty and my voice almost choking.
“Brother, that’s good to hear.” was the reply.
Not condescension or superiority.
It was care and concern.
It was the harvest of the seeds sown months earlier.
It was a man reaching out to another man and saying – without words:
“I hear you.” and “I will stand by you”.

A few months later,
much to my wife’s amazement and relief
I left my home for a week to begin my own MROP experience.
I had no idea what was ahead for me.
What was in store.
All I knew
from the advice of others
was to ‘trust the process’.
To me that was akin to saying:
“Give us your money and now go jump off this cliff”.
I was never so afraid in my life.
And yet, I found myself sitting in a bus full of other men.
All of us strangers.
Travelling out to the bush with little more than our clothes and our pain.
Together.

What I had thought was the end of my journey,
was really only the first step of the rest of my life.