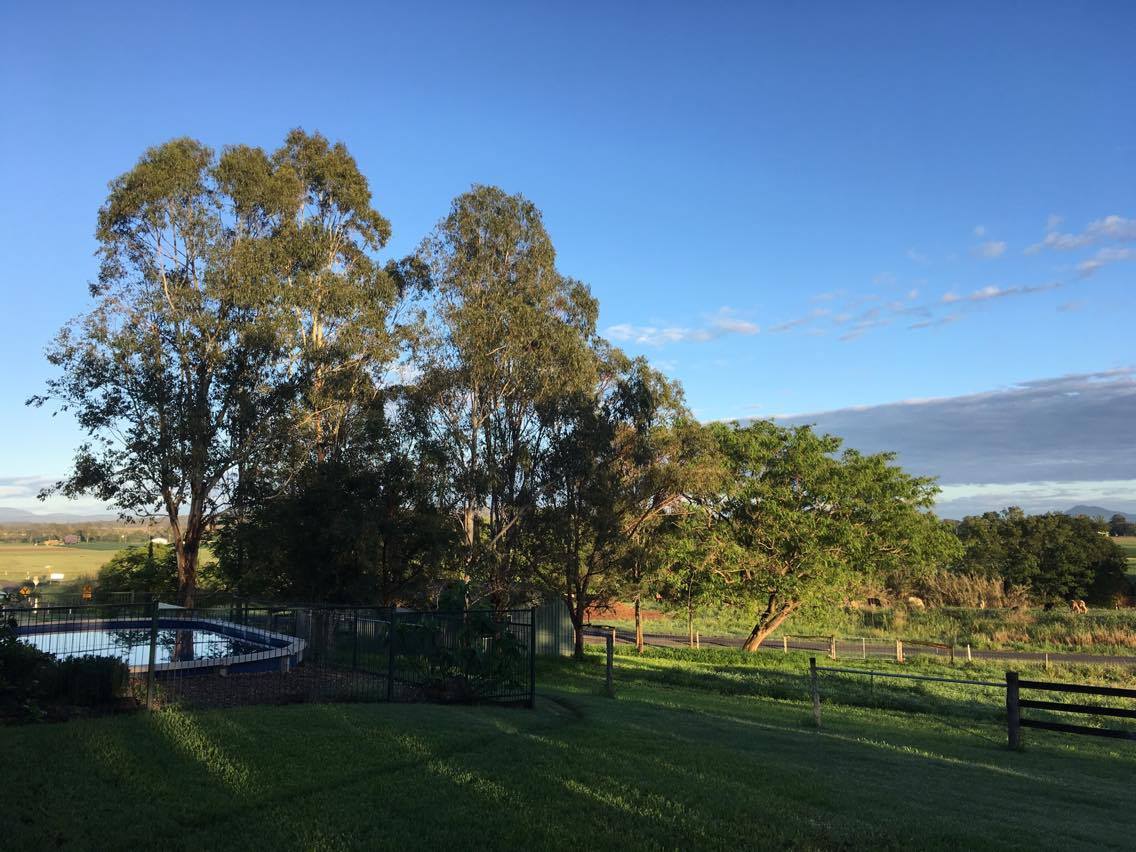 The following is by one of the men in our community, Neil Pennell. He wrote it in Spring 2017 and I thought it was so good it was worth reposting on our website as a blog. I hope you enjoy it as much as I did. The photo is from his yard in the beautiful Fassifern district, the trees the King called home. – Richard Fay 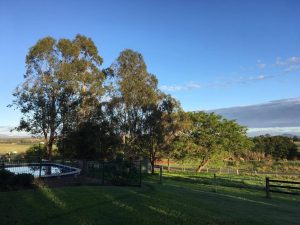 The King is dead. Long live the new King. Just give us few days to sort out who the new King is going to be. On Friday, the male magpie who ruled this bunch of trees in our front paddock for many years came to the end of his reign. I know this because one of my 2 chocolate Labradors, who have the run of our whole property, dropped him at my feet. Amazing really. Ranger is the most food-motivated dog I’ve ever known and devours anything remotely edible that he finds, unless it has feathers. If it’s a bird he carries it around in his big soft mouth all day until I return home from work and then he drops it at my feet. Occasionally there might be a few feathers missing from all the mouthing but mostly, they are intact. If I were to cut the bird in half and hand it back to him he would devour it in a flash, but he would literally have to be starving before he would eat a whole bird that he found. First he has to bring it to me. I didn’t teach him. He just does it. He is a retriever I guess. It’s a funny thing instinct. But I digress. Back to the King.

Until this year, the old King Magpie was a force of nature. We have had a run of many good years of rain and with lots of food available, he has raised many sons and daughters from the nest in the middle of those trees. He has been all at once fat, sleek, powerful and beautiful. All young males who entered his territory were swiftly given a reading of the ownership act with slashing beak and talons. His morning song has delighted us and he has wandered with impunity around our lawn and veranda. The dogs gave up chasing him long ago. Too fit. Too smart. Untouched. Untouchable. That is, until this year. This year, after a post-Cyclone Debbie flood in March, we have had no rain. Dry as a chip. By August there was mostly bare dirt and barely a blade of grass. And yet the King and his Mrs tried to do again what they’ve done so many times before, what instinct told them to do. In July, they repaired their nest and in August they did the deed, laid their eggs and commenced to raise their babies. But something wasn’t right. The King was struggling. Every time we went outside the house he appeared, looking for food. We had never actually fed him but occasionally our appearance heralded opportunistic food in the form of a snatched dog biscuit or some food off the plate thrown in the garden. He looked thin, drawn and his feathers were dull and lifeless. He continued to strut as proudly as ever but really he was a pale imitation of his former glory.

Once, on a beautiful winter’s Sunday we had lunch with friends out the front of the house on the lawn and he stood on the end of the table looking at me for the whole meal. Perhaps he knew that I knew he was struggling. I reneged on my promise not to feed him. It was a mistake. Every morsel was swiftly flown back to the nest for the babies. He kept none for himself. The next morning he was tapping on our glass doors with his beak at dawn. He was desperate to care for his family, but I knew we couldn’t feed him again. Then a couple of weeks ago the rain came…..plenty of it. Day after day of his aging, thin frame being soaked obviously took its toll. He looked dreadful. Then tragedy. A week or so ago Ranger brought me the body of one of the babies. Nearly fledged but not quite, perhaps it fell from the nest. Then Mrs Magpie disappeared. Then came Friday. The King is dead.

This morning another lot of rain has passed and it’s a stunning, sunny Spring morning. The grass has gone crazy and with it suddenly there is a feast of fat grubs and insects in the paddocks for the birds. Unfortunately they are about a week too late for the King and his family. I was woken in the pre-dawn light by bird song, specifically magpie song…….lots of it……and the sound of wings clipping in the air. Now I am standing on the veranda and watching as perhaps 30 young male magpies compete for the old King’s territory. They are flying in together in groups of about 5 from every direction. First they perch on the outer branches of the large trees and try to out-sing each other for a minute or two and then they fly into the air and at each other, ripping and tearing in fiery mid air clashes. Then they all fly off in the direction from which they came and it’s all about speed and mid-flight swooping at each other as they disappear in the distance. Soon they are replaced by another group from another direction. Perhaps there is a young lady magpie sunning herself in one of those trees down there. I can’t see her from here but it’s pretty unlikely this commotion has nothing to do with sex.

The whole scene is stunning and wild and wonderful to behold and yet at the same time I am smiling because it reminds me of how bloody ridiculous young males (and some old ones) can be. I was once a young male. So much trying to crow louder than the other blokes, a fair bit of preening and trying to impress. So much striving to be bigger, better, stronger, faster, cleverer and wealthier than the other fella. In church circles, it was worse because you had to add in an inordinate amount of striving to be good. So much striving and plenty of failing in my case. From what I read what other men have experienced, I’m not alone. Everything was such a grandstanding contest all the time. Now I look back and it brings me to tears that I wasted so much time and energy trying to be “more” because no-one told me that there is so much more to be learned from “less”. Perhaps I wouldn’t have listened anyway, pretending I knew it all and yet actually clueless. But this morning as I watch these young fella magpies in their own grandstanding, I am trying to be a little kinder to the young man I used to be. Like them, we human males are so much at the mercy of our genes, our hormones and our instincts when we are young. Raised in a culture where no-one taught us what to do with the feelings that those powerful forces raised inside us, is it any wonder that when we failed in our striving to be “more”, we hammered ourselves mercilessly. Some of us are still doing it. Striving to be “more” and failing soon begets striving to be more drunk or more addicted to something. We’ve all been there.

As I turn and walk back inside the house to deal with another busy day, my thoughts shift from the youngsters back to the old King. He reminds me of Richard Rohr’s five hard promises: Life is hard, Your life is not about you, You are not in control, You are not that important and You are going to die. I will miss my old friend. The way he lived his life, the manner of his final days, his resilience through hard times, his concern for those other than himself and ultimately the quiet dignity of accepting that there was nothing left for him but “less”. One day the new King will follow the way of the old. Maybe he’ll teach me a few things also. I look forward to meeting him.