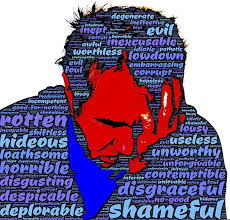 We climb into it, the two of us, and I get the tail, you get the head. I’m completely blind but you are assure me you won’t lead me into danger, up there on the stage, guffawing crowds, a buzz of half drunk heckling sawing through the smokey air. That’s what a year of drama lessons have amounted to, being an asses’s ass, I chuckle. Yeah, it’s humiliating, but nobody can see me, and it’s all in the name of charity.

And that is the only time it does not hurt when someone makes an ass out of u and me (dad joke #634).

The other type has been stalking me for weeks now, and it hasn’t let go. A colleague assumed – as did I – about an issue regarding client payment. But we assumed differently. I carry the concern of my integrity appearing to be compromised. My wife and I assumed what renovations to our new home would cost, and blindly submitted them to council, only to discover we have to go back to the drawing board. We also assumed how long they would take. I assumed a friend got the email about an event he dearly desired to attend. He hadn’t. I assumed another had been told to leave the pots and pans he was washing with a servant heart, to attend a ceremony that could not commence without him. Again, I was wrong. I stormed up to him and demanded he leave the kitchen immediately. Like an angry father talking to a child. I assumed I was justified in my anger (a double assumption).

The problem with assumptions is you don’t know you have them. You could read this and think “how do I avoid them?” and to some extent, you can’t. Perhaps if you are a pedantic “i” dotter, you might minimise their frequency. My spiritual director soberly observed my next humiliation will come – as surely as the sun rises – but I will not know how, when, why, where. The context is always different. You cannot protect yourself from assumptions.

But you can disarm their power. To do that, you need to embrace their impact.

Let me explain. When I act on an assumption, I am acting hastily. This is the fruit of over confidence, the belief that I am right, even when I have no reason to have such confidence. However, mistaken confidence is only half the problem. The other is the illusion that there is a ‘right’ perception of things.

The initial response to offence is to act swiftly, which detonates the assumption with destructive force, amplifying it’s impact like tsunamic ripples in a pond. To allow an offence – to let it do its work in me – is to be a shock absorber. To allow humiliation is to transform it into humility. Humility allows me to see things as they are, not how I think they are. To walk lightly on the earth, to listen deeply, to be steady in my spiritual and emotional gait, to deeply receive another. I have a lot to unlearn.

It’s the false self that likes certainty, and is constantly grasping for it, because it’s chief fear – other than irrelevance, which it experiences as death – is not being in control. But we are not in control. In a recent dialogue with dear brothers on the subject of humiliation, every instance orbited loss of control. It’s paradoxical that those who feel the most out of control appear the most controlling. What they do is take their fear and project it onto us, so we experience what they feel, and they don’t have to.

I didn’t have to experience the shame of being a bad leader by not getting all our men present so a ceremony could commence. I could spew it onto my brother. James Gilligan, the sociologist who has worked for decades with prison populations, observed that violence is an attempt to turn shame into self-esteem. “Look at me, I am a strong leader, I will force everyone to do what I say.”

The theologian Karl Barth, expressing the idolatrous nature of assumptions, wrote “Thou shalt make no image, no abstraction, including none of THE American, THE Swiss, THE German.” They don’t exist. They are fictions we create to make the other understandable to us, by difference, so that we can categorise and place in a mental container that puts us in control. We are forever filling in the blanks. But the blanks, as John Howard Griffin noted, “have been filled in far differently from those of a child grown up in the filth and poverty.”

Listening to the indigenous journalist Stan Grant this week, I noticed another assumption dislodge in my cranium. I assume that Aboriginal people struggle because of white oppression. So often, the opposite is true: They thrive despite white oppression. Increasingly, they are university educated, and decreasingly, imprisoned. Is that ratio what it should be? By no means. But seeking to be a voice that does not oppress, I take the opposite pole and oppress by enhancing a victim stance. How damaging is it for me to assume I know what it must be like to be an indigenous Australian! My ego wants to make reality into my own image by objectifying everything as ‘other.’

T.K. Coleman expressed this succinctly when he observed that “positive assumptions are needed only when you have negative assumptions that you’re trying to overcome. But when you drop your assumptions altogether, your soul stands naked in the open fields of possibility. And what you choose to create from that space is up to you.”

“Out beyond ideas of wrongdoing
and rightdoing there is a field.
I’ll meet you there.
When the soul lies down in that grass
the world is too full to talk about.” (Rumi)

The only way forward is to accept that we do not know. We cannot know. This is called having the heart of a novice, a beginner’s mind. To not know. This is the path to wisdom. The destination is to be free of the burden of any assumption, to be released from the prison of certainty. The etymology of the word wisdom, so often interpreted as knowing, actually springs from the capacity to truly hear. This sounds new age in a world that rewards knowledge, but it’s very old age. We use phrases like “knowledge-based systems” and “the information age”, but we are often using modern, antiquated machinery to inform instead of ancient, sophisticated wisdom to transform. The sixth century BC philosopher Lao-tzu wrote that “a wise man has no extensive knowledge; He who has extensive knowledge is not a wise man.”

The three tenets of Zen Peacemakers, an organisation committed to the work of social engagement using Zen practices, are not knowing, bearing witness, and compassionate action. They are wholly compatible with the best practices of other faith traditions.

The three tenets are described in this way:

“Not-knowing is the first tenet of the Zen Peacemakers. Not-Knowing is entering a situation without being attached to any opinion, idea or concept. This means total openness to the situation, deep listening to the situation.

“It is the role of the Bodhisattva to bear witness. The Buddha can stay in the realm of not-knowing, the realm of blissful non-attachment. The Bodhisattva vows to save the world, and therefore to live in the world of attachment, for that is also the world of empathy, passion, and compassion. Ultimately, she accepts all the difficult feelings and experiences that arise as part of every-day life as nothing but ways of revelation, each pointing to the present moment as the moment of enlightenment.

“Bearing witness gives birth to a deep and powerful intelligence that does not depend on study or action, but on presence.

“We bear witness to the joy and suffering that we encounter. Rather than observing the situation, we become the situation. We became intimate with whatever it is – disease, war, poverty, death. When you bear witness you’re simply there, you don’t flee.

“Loving Actions are those actions that arise naturally when one enters a situation in the state of not-knowing and then bears witness to that situation. It has nothing to do with the one’s opinions or other’s opinions as to whether it is loving actions or not.” (see zenpeacemakers.org).