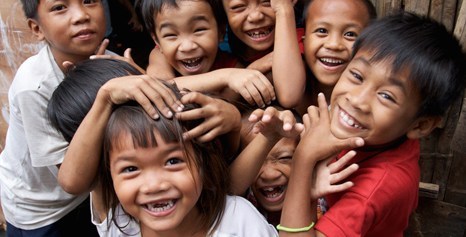 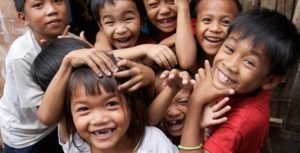 When I was a young man, I spent nine months living in the Philippines. One day, I stood on a hill above a slum in Mindanao in the south of the country and looked out at abject poverty, spread out as far as the eye could see. I recall being overwhelmed with sadness that so many people were born into great poverty and would die in it.

As I watched, heartbroken at their suffering, I sensed an invitation to look closer. I saw two men having a yarn in front of a lean-to. Some children were playing with sticks and a ball. Four women were chatting as they hung out washing. A teenager chased a pig around a pen. What I noticed was the human capacity to engage with life, despite the absence of what Westerners would think facilitates happiness. The people of the Philippines often rank in the top three happiest people in the world, despite being way down the list on economic indices.

Not long after, I found myself in a shopping mall in suburban Sydney, feeling suddenly overwhelmed at the superficiality before me. People were mostly alone, appeared to be stressed or distracted, and I found the material wealth to be oddly intimidating. I got in my car, drove straight home and hid in my bedroom, feeling aghast that it was my own society that was truly poor.

In the years since that experience, I’ve discovered that happiness is not the counterpoint to suffering, but flourishes best when the two can coexist. Material wealth seems to establish an expectation of happiness, which forms the desire to attach to things and circumstances to maintain feelings of happiness. I am reminded that advertising and capitalism has played a large role in this, enticing us to want more.

Buddhists and Hindus call suffering Duhkha; its etymology is derived from an axle hole that is not centred, leading to a bumpy ride through life. Sukha (happiness) on the other hand, refers to a good axle hole. The centre is good, so that life revolves smoothly around it. This hole at the centre, or to quote the Taoist poet Chaung Tzu, this palace of nowhere, is one’s true self. The cause of duhkha, according to Buddhists and the Christian desert fathers and mothers, is attachment or desire to things beyond us, outside us.

Borrowing from the words of the desert father Abba Moses, the 11th century monk St Romuald formed a brief rule, which begins “sit in your cell as in paradise. Put the whole world behind you and forget it.” Such asceticism is not an invitation into anhedonia. Quite the opposite, it is regarded as the surest route to true contentment, the heart of true happiness. St Romuald is assuring us that we already have everything we need for bliss within us, echoing Jesus’ words “the commonwealth of God is within you” (Luke 17:20-21).

Not surprisingly, recent discoveries in neuroscience are supporting this ancient, perennial wisdom; note that I quoted four faith traditions above. They identify three pillars of human flourishing as foundational to our happiness.

The platform upon which these pillars stand is the biological necessities of food, shelter and safety, and the absence of generational trauma. When any of these are not present, any attempt to build the pillars of happiness will fail. Perhaps this is why Jesus expressed preference towards the poor; their flourishing is our flourishing. I read this week that anthropologist Margaret Mead identified the discovery of a healed broken bone as the earliest sign of civilisation – not fire, or a wheel, or pottery. We all approach and engage life with a joyous embrace when we recognise the inherent worth of one another.

Once this platform is established, the first of these pillars that support a flourishing life is connection. Connection is facilitated by the quality of empathy that brings us into awareness that, to quote the Jewish philosopher Martin Buber, “all living is meeting.” This is the heart of Trinitarian living, the joy of healthy, life-giving relationships. If we do not connect deeply with ourselves and with the world as it is (not as we might want it to be), we experience inner hostility and loneliness. Right now, technology like Zoom is helping this connection happen, as is walking around the block and talking to neighbours – from a distance.

The second pillar is control, the gift of agency that is essential for human empowerment. Like connection, agency is internally established. This is gained through protective anger that achieves justice in places where we have lost our agency. One thinks of Jesus clearing out the money changers at the Temple, restoring the agency of women, gentles, the poor and children in worshipping in the temple. Engaging in social justice for others can give us greater agency within our own lives as well. It is also activated by forgiveness, the ability to allow life to be what it is. The person who does not feel in control of themselves appears controlling to others, rigid, frustrated, even violent. The person with an internal locus of control has calm emotional regulation.

The third pillar is motivation, the energy that is fuelled by our imagination and shapes our world with innovation. Gratitude is the great gift we have been given to activate motivation. When we express gratitude to others for simple acts of kindness or become aware of gratitude for natural beauty around us, we feel highly motivated to imagine new ways of shaping the world to be kinder and more just. When we lack gratitude, we fall into apathy, listlessness and demand constant material stimulation to rouse us from our malaise. It’s usually gratitude for the very small that sparks motivation on a regular basis.

In a world that has so suddenly and universally shifted on its social axis to the point that connection is not physical, control is not external and motivation is not material, and when our lives have started to resemble St Romuald’s cell, we are being given a great invitation, one that we may not get again in our lifetimes, to find the paradise waiting for us within.