Growing men in a culture of cautious masculinity

(this is a transcript of a talk given by Richard Fay, CEO of the Centre for Men, at the “Amplify” conference in Brisbane, on Saturday 7 March 2020).

The Jesuits recently commissioned research in Australia on the attitudes and behaviours of men aged 18-30. It involved an online survey of a representative sample of 1,000 young men from across the country, as well as focus group discussions with two groups of young men. This study is modelled on research in the United States, United Kingdom and Mexico that was released by Promundo in 2017 which produced the same results.

The behaviours and attitudes include:

Two thirds of those surveyed have bought into these beliefs. That suggests two two of every three men who walk past you in the street aged 18-30 think this is what a man should be.

These form unconscious core beliefs that are stored in the body. Beliefs like

After a man poured petrol on his wife and young children and let them burn to death and then stabbed himself to death, I said there were five victims of that tragedy, not four. Yes, one of the victims was also the perpetrator, but he was a victim of the man box. I’m not suggesting he deserves compassion or understanding – I cannot fathom what he did and I would’ve done everything in my power to stop him – but he is a victim of very bad thinking, and there are hundreds of thousands of men out there right now who are stuck in this horrible box. Why are they victims?

These men will eventually go on to have higher rates of cardiovascular disease. Because these beliefs are false, they need to be confronted – by everyone, constantly. But they can only be confronted by people who have healthy core beliefs. Those people will be powerfully assertive. And they will be outside the box. So, the question is, how do we keep men outside the box or get them outside it?

Much of society and the media uses shaming. Men are bastards, men are just animals, lock them all up – men are nine times as likely to be incarcerated than women and almost four times as likely to kill themselves and twice as likely as women to be killed by another (man) Or at the very least, the attitude is, males are just an immature, less evolved form of human. The #metoo movement amplifies this. This is ubiquitous, as the pop culture mirror to western culture, The Simpsons, reminds us: When it comes to maturity, responsibility, kindness, who is it? Homer or Marge? Bart or Lisa?

So it’s not only men who put themselves in the man box. We can all do it, unconsciously. This month, the Atlantic published an article “the miseducation of the American boy.” it is a very powerful read. Here’s a quote:

“Feminism may have provided girls with a powerful alternative to conventional femininity, and a language with which to express the myriad problems-that-have-no-name, but there have been no credible equivalents for boys. Quite the contrary: The definition of masculinity seems to be in some respects contracting. When asked what traits society values most in boys, only 2 percent of male respondents in the PerryUndem survey said honesty and morality, and only 8 percent said leadership skills—traits that are, of course, admirable in anyone but have traditionally been considered masculine. When I asked my subjects, as I always did, what they liked about being a boy, most of them drew a blank. “Huh,” mused Josh, a college sophomore at Washington State. (All the teenagers I spoke with are identified by pseudonyms.) “That’s interesting. I never really thought about that. You hear a lot more about what is wrong with guys.”

“There’s actually some evidence that male infants are more expressive than females. Yet, from the get-go, boys are relegated to an impoverished emotional landscape. In a classic study, adults shown a video of an infant startled by a jack-in-the-box were more likely to presume the baby was “angry” if they were first told the child was male. Mothers of young children have repeatedly been found to talk more to their girls and to employ a broader, richer emotional vocabulary with them; with their sons, again, they tend to linger on anger. As for fathers, they speak with less emotional nuance than mothers regardless of their child’s sex.

So what does work?

Every ancient culture initiated boys into manhood. It taught them

The concept of adolescence was created by advertising agencies 90 years ago to form a new market they could reach – now we have patho-adolescence, with 50 year old men acting immaturely. Throughout 200,000 years of human civilisation, adolescence did not exist. Communities could not afford for boys to sit around and consume.

What do these rites look like? That’s always a secret, and that gives them power because men won’t take anything seriously if they can control it. This is how Krista Tippett describes ritual space;

“For most of history, religion was a full body experience, a primary space in common life where we danced and sang and laughed and cried and ritualised the passages of our lives. Rituals are sophisticated ancient intelligence about the body. They are like physical corollaries to poetry. Rituals tether emotion to flesh and blood and bone and help release it. They embody memory in communal time.”

Notice this theme: Getting men into their bodies and accessing their unconscious. So many men come into my room having broken their hand by punching holes in walls. I saw it portrayed recently in the Netflix show Atypical – by a good, gentle, loving man. Under stress, women go to the language centres of their brain, to try to re-establish connection. Men go into their bodies to recover their lost identity.

Aboriginal elders would take the boys into the wilderness and paint them in white (the colour of death) and abandon them. Some would cut them in their torso until they bled and felt great pain and very weak. Many cultures circumcised their young men. In Vanuatu, boys would jump off towers with vines tied around their ankles. Some died.

This is a key truth to a male rites of imitation: you are going to die. Others include “your life is not about you…. life is hard, but sacred….you are not in control”

We run a younger men’s rites of passage every year that invites 18-28 year olds into this truth. It is five days in the wilderness.

But there’s a problem with practicing any rites of passage. See if you can spot it. It’s the word “elders.” You cannot take anyone where you yourself have not been. I was initiated in 2009, in our Men’s Rites of Passage, that initiates men into elderhood. It carries similar themes to the Younger Men’s Rites of Passage, but has an entirely different trajectory – which is beyond the scope of our talk today. I mention it now because if it is your heart to become involved in male initiation, you need to be initiated yourselves, and this cannot happen in a classroom or a book. It is always embodied, and always in a community of elders.

We must develop mentors who will not seek to make little versions of themselves, but empower young males. Fatherlessness is an epidemic in our society. Even when dads are around, they often feel disempowered. This week a couple came to my room; the mother was protective of her 14 year old son who was feeling intimidated by his father. I said “what if the son stood up to his father” and she said “he could never do that. I need to protect him.” Can you see a problem here? The father is passively aggressive, and needs the son to stand up and say “hey dad, that’s not ok.” But the father needs initiation. And the son needs mentors. We say it will take 5 generations of initiated men to turn the world around. But revolutions have to start somewhere. I’m grateful that my three sons are generative, kind, life giving husbands and fathers.

Tender-hearted young men are safe men, but they are also fiercely courageous. The word “courage” is from the Latin cor meaning heart, and French word that means to reveal the heart. So vulnerability is bravest thing a man can do. We say that men have shy souls. Watch what happens when a woman shows up. Because he feels he has to be strong around a woman, he will almost always clam up. Even around men who are not safe, he will talk about shallow things only. We have a circle wisdom that has some basic elements:

This creates a safe environment for young men to talk about stuff. The only thing that remains is the quality of the prompt, and the space to allow transparency. Young men who engage in talking circles are more likely to be kind, safe, connected to their own emotions and to those of others, and have emotionally healthy lives.

Young men need a challenge, something to get their teeth into. Archetypes are a way of understanding the stages of our journey. One key transition in adolescence is the journey from cowboy to warrior. They have strength and they know it is to serve others. They need to give themselves away, because their life is not about them. One simple sneaky way an American teacher did this was to put the smartest boy in a class next to the prettiest girl. He would give his power to help her improve her grades – and in the process, help his own. Yes, his libido and ego were involved, but the other boys followed his lead. Boys then learn that being smart is good, and helping others is good. They respect girls and have healthy connections with them. 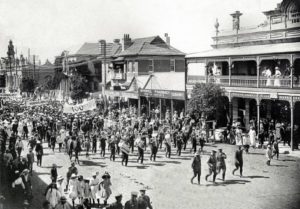 When I was 21, I joined YWAM and lived in the Philippines for almost a year. It made me become a man. Gap years are a very good idea if there is an intentional invitation to adventure. Governments have hijacked this sacred truth to serve as their cannon fodder for thousands of years. In 1914 and 1915, marches started in rural NSW and Qld and ended in the capital amassing tens of thousands of men along the way. Here’s the first, that started in Inverell, from the local newspaper:

“The mayor gave the official farewell, proclaiming “this is one of the proudest days in Inverell’s history”, and promised that these men would “not be forgotten in Inverell”.  Lieutenant Archibald Gilchrist, Officer in Charge of the recruits, referred to them as ‘finest body of men he had handled’.  The huge procession then proceeded down to Byron Street and on to the railway station, passing shops closed for the occasion. Thousands of people stood in the streets as bands led the way.”

Most came back deeply scarred or not at all. There were no bands, no processions, no mayoral speeches. These are our grandfathers and great grandfathers.

A few years ago, British PM David Cameron cautioned young Muslim english men not to become radicalised because it was very dangerous and they could die for their cause. He did not realise that this was the very thing that was attracting these younger men. Young men need challenges. Whether it is mowing the lawn on their own (and making a complete mess of it) or going on public transport to pick something up for a parent, they need to be given responsibility early. They need to be trusted, and they need to put themselves out. And to do it alone.

I want to close with this quote by Marc Pritchard, who is the chief brand officer at Proctor and Gamble, who created the Gillette ad “is this the best a man can get?” which created a lot of noise a year ago: