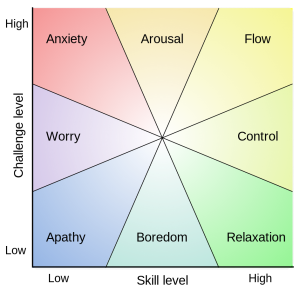 Hungarian psychologist Mihaly Csikszentmihalyi formed a concept he calls flow, which we might term being in the zone. I’m imagining jazz musician James Morrison ‘feeling’ the music and improvising so that he becomes an extension of it; he experience his whole being light up as the notes flow through him from secret wells of delight. His proficiency meets the challenge and the risk of not knowing what comes next, yet intuiting it. It requires mastery of a craft, complete immersion into it as intrinsic reward (the object itself is it own reward, no outcome is sought).

I’m imagining a river. I can sit at the bank and watch it, or I can dive in and glide effortlessly downstream. In the first, I am a spectator. In the second, I am one with the river. I am not completely in control but assuming I am a proficient swimmer, I am not anxious at all at the loss of control.

In an interview with Wired magazine, Csikszentmihalyi described flow as ‘being completely involved in an activity for its own sake. The ego falls away. Time flies. Every action, movement and thought follows inevitably from the previous one…. Your whole being is involved, and you’re using your skills to the utmost.”

If the challenge rises but the skill level remains low, we experience worry and eventually anxiety (moving up the y axis to the top left hand corner). The corollary to worry is control, where our skills are more than capable of meeting a moderately demanding task.

If the challenge is high and the skill level is moderate, we experience arousal; it’s not full blown anxiety but certainly some sweaty palms and dry mouths (as so many people experience when asked to make a speech, for example).

But, if the challenge is high and the skill level meets it (the top right corner), we experience flow. I recently watched a video of the Beatles’ last live performance on the roof of the Apple Records building in London in 1969. The Beatles had ceased performing live years earlier, and this finale was impromptu, and it was masterful (and they had to turn the volume down because of complaints!!!).

If we could see flow on an EMRI scan, we would notice the parietal lobe at the rear of the brain go quiet – the place where we construct a sense of a separate self with all it’s requirements to meet social criteria, to be affirmed and admired or fearing being judged. We would also notice the prefrontal cortex at the front of the brain go quiet, where our volitional energy is expressed. This is not willed expression which would dam the flow, but beyond any need for control. The impulsive brain – the amygdala – right at the centre – would light up with great delight, while the thalamus – the reality generator nearby – would radiate as it experiences a union with what we are engaging in. This is what Martin Buber calls I/Thou. In other words, flow is an active, playful version of the quieter, more (seemingly) passive contemplation or meditation.

Another way of describing flow is to be at the creative heart of your potential, to be immersed in the eternal now. The great 20th century German poet Rilke knew long periods of creative block – years where he could not express what was within him. Then, suddenly and inexplicably – it would flow – gush in torrents, with dozens of poems written in the space of a few weeks. The first such flood came when he immersed himself in the suffering of Russian peasants. An immediate awareness of their travail dove him into a storehouse of expression.

Few people ever discover flow. Csikszentmihalyi’s research found that it is because most people do not have an autotelic personality. Autotelic people possess the qualities of persistence, humility and curiosity. These are the hallmarks of great emotional intelligence.

Persistence is a defining characteristic of resilience. In his book Outliers, Malcolm Gladwell claims that it takes 10,000 hours to master any craft (and he uses the Beatles as an example). Eugene Peterson called this a long obedience in the same direction. I once asked Richard Rohr how he felt about his obvious ‘success’ – knowing it was never a goal he sought in any way. He simply said he kept asking questions others didn’t seem to be asking (curiosity) and followed them to their conclusions – and wrote about his discoveries. He started doing that in his 30s. He’s now in his mid 70s. Curiosity is that delightfully non-judging stance that asks “why?” to everything before us, simply in order to know. Oh how I love a well considered question. I dare not answer it with a statement; I’m far more intrigued to ask why they are asking that question! There’s the rabbit hole that leads to endless discoveries.

And humility. To be able to stuff it up entirely, and laugh as the tower falls. And then to try again. To have no care for the outcome – because that would make the task extrinsic, not for the joy of it. For example, if I cared if anyone reads this – or worse, likes it, I will either not even start, or will keep checking to see if there are any likes or comments – and the whole exercise will be lost. I’m writing this for me, and only because I desire to be in the flow. On humility and outcomes, Thomas Merton invites us to “be anything you like, be madmen, drunks, and bastards of every shape and form, but at all costs avoid one thing: success . . . If you are too obsessed with success, you will forget to live. If you have learned only how to be a success, your life has probably been wasted.”

Thomas Edison was told he was too stupid to learn anything. He was fired from his first two jobs for being non-productive. It took him 1,000 failed attempts (he called them steps) to invent the light globe. Albert Einstein didn’t talk until he was four or read until he was seven, and a teacher described him as “mentally slow, unsociable, and adrift forever in foolish dreams.” He was later expelled from school and denied admission into college.

The world does not understand flow. It did not in the past and it certainly does not today, when financial profit and expediency are highly valued. But that’s never been the reason to become immersed in flow. Flow is its own reward.