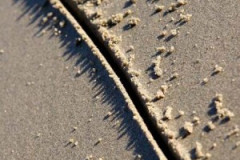 Trying to understand Reality is often like a line trying to comprehend a triangle, or better, a pyramid. It is dimensions beyond its own reality. So it is with us, we are three, perhaps four dimensions if I include our awareness and interconnectedness. According to string theory, there are nine spacial dimensions and the tenth dimension of time. We are landlocked, stuck within this kaleidoscope of existence with a puny comprehension of life. We aren’t that far past the slug.

God or whatever metaphor you choose for ultimate Reality is beyond all dimensions, into realms we cannot conceive. To help us, Love gives us tools within our dimension. For example, eucharist (thanksgiving) and baptism are corporeally enacted, in other words, their meaning is revealed within our dimension. The ultimate expression of this, according to the tradition I belong to, is the incarnation, the belief that the Christ came as a human, as ordinary in most ways as any human, visible to us, audibly and viscerally present. Blood, sweat and tears.

Rather than ask us to elevate ourselves above our humble station as holiness does, Love chose to dignify our lowly station by making it home. Yet we still shame this lowly station. I’m talking about the body, or more specifically, the libidinal energy stored in the body.

Australian author David Tacey remarked that the custodians of symbolic truth – the religions of our tribes – have been robbed by science, the obsession with proof and rationality. Our religions have taken to the texts with the scientific method, with disastrous results. We have banished the dimensionless truth from our feeble limited frameworks. We have reduced ourselves again to drawing lines. The consequence is people are either in or out. The lines that aren’t straight get judged. they cannot join with other lines. Only the straight can join.

The libido more than any other human energy is shamed, suppressed and scapegoated. Because this energy lives deep within the body, the two become synonymous – so we shame our bodies, we shame our gender, we shame orientation, we shame any manifestation of our ache for intimacy that does not line up with the scientific method of truth (aka fact). We send the victims of our line drawing into silence and pathologies and distractions and medications. More than anything, we judge. That’s the easiest release valve to our own repressed shame.

Because this energy is irrepressible, it will be expressed in ways life draining or life giving, but our symbol-poor forms of religion deny its legitimacy. Any wonder fig leaves were sown where they were. Any wonder ancient rites of circumcision were created to honour our wounding. Symbol, ritual, these invite us to bring home our orphaned bodies with their shame, to love again what God created, to celebrate the humus of our species’ name, and make holy all things. But we miss this symbolic truth and argue over fact, impotent knowledge.

This week the US Supreme Court ruled on what constitutes marriage. This causes some to draw lines. They say this will bring the judgment of God on America. The rest of the West is following suit, so by extension, the world is going to hell. These same line drawers could not forcefully argue against polygamy from a Biblical perspective, but it is regarded by modern society as barbaric, depriving women of rights. This follows the trajectory of Scripture; to bring freedom where there is none, starting with slaves, then with women, then with minorities. Marriage has always been a fluid construct, a symbol of the freedom to love another human being with kindness, sacrifice, and wholehearted commitment. To bring dignity to humanity.

I’m a little unsure how less than two percent of the population who seek to make a public commitment to loving another person of the same gender is going to bring down the judgment of God. It can’t be that. I’ve seen the comments about it leading to group marriage and beastiality, as if we will suddenly all lose our minds. I’ve heard the arguments about the rights of children to both a mother and a father and it is compelling, but given the almost wholesale failure of heterosexual marriage, kids to straight parents miss out on both as often as not. Perhaps love trumps gender in parenting. So what is all this drawing lines really about?

I’m persuaded it is our fear of libidinal energy and our failure to grasp the symbolic truth given us in Scripture, so that we fail to understand God’s perspective on humanity and thus shame it. What is a tiny portion of any faithful, loving relationship becomes the point of demarcation. The line is reduced to a point. What is not understood is shamed, what is shamed is too painful to hold so it is projected onto a scapegoat, and we diminish the dignity we could afford one another to something quite horrible. Violence – and seeking out a god of violence – is the inevitable result. I can’t help but feel that is what is detestable.

I’m amazed at how Jesus ignored ‘sin’ and loved people. I’m staggered at how thoroughly uninterested he was with judgement and wrath, with purity codes and holiness laws, ‘the way things have always been done.’ He didn’t argue, he simply said “you have heard it said…. but I say to you….” And then lived it. To the end. While the line drawers of his day squawked their disapproval, he drew amazing shapes with the heartache and loss he encountered. He drew a line in the sand, as the lines of accusers slowly retreated. Then he elevated the broken disconnected lines to breathtaking dimensions, by connecting them to Love. This I take to be my commission. I have no other. The rest is none of my business.

Richard is the Ambassador for the Centre for Men, has a background as a pastor and spent many years in the corporate sector. He has a masters in counselling and a diploma in ministry, and has a heart to champion men, women, marriages and families. Richard is married to his wife Judy and has three sons.

View all posts by Richard Fay