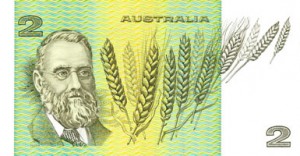 This week a friend sent me an article on male-perpetrated domestic violence. Here are some phrases in the article that stood out: Seething rage… the monster of male supremacy….. what the world needs is men’s action to destroy male violence…. we have to start treating abusive men as the enemy…..

Yes, you knew the but was coming. But it won’t work. Why? Because it fails to understand the problem, and it keeps the violence in circulation. Any problem cannot be solved by the consciousness that created it.

In the mid 1980s Australia moved from the one and two dollar notes to coins. To this day I have not fully adjusted. My pockets jangle about with metal, my belt has to be tightened to keep my trousers up, and more than once I’ve wondered why a 50 cent coin is larger than a one dollar coin is larger than a two dollar coin. But we aren’t going back. The notes are gone, for good.

The notes are still legal tender; you can still take them to the bank and they are still worth their face value. But they are not legal currency; businesses are not required to accept them as payment for goods or services. I half wish I’d kept a bunch to see if I could use them.

Like those old green and brown notes, violence must be taken out of circulation if the situation is to ever change. This is the crux of the crucifixion. It remains the greatest untried experiment this world has known. Yes, it has been tried- with extraordinary though slow success, but the costs are so high, our investment in our rights so watertight (and held vouchsafe by our governments) that collectively, we stall at the starter’s gun.

So here’s some things to note, and in this blog I won’t have time to dwell on them.

Second, violence has much to do with the locus of control of fear and pain. Is it internal or external? If it is external, then someone else has to absorb it, and I will keep it in circulation and expect them to foot the bill. If it is internal, I will process it appropriately and allow it to change me. That sounds simple. It is not.

Men have been told they should be tough enough to weather any storm. They are told to dominate in social situations. They are told to ignore what they feel. Men are biologically wired to carry pain in their bodies. Men are physically stronger than women. The male sex drive is faster than a woman’s, and it takes blood from the only organ that can give it – the one he needs most when he is triggered (his smart brain). Men live in a sex-saturated world and are bombarded with explicit images that denigrate men as animals and women as objects. And we buy it. We buy it because it anaesthetises our pain, it distracts us from what we don’t want to face and hey, it’s a free world.

Now it gets complex – but stay with me.

We have constructed a female way of learning. Sit quietly and pay attention to the teacher. With cascading testosterone in your body. And boys are told to act up (much as girls are told to be good), so “teacher’s pet” is in the last thing a boy wants to hear. To love to learn is to somehow be less masculine.

We have constructed a female way of dealing with pain. A survivor of the Tutsi genocide in Rwanda said “you placed our men in a softly lit room, away from other men, away from their music, drumming, away from nature, away from sunshine, and ask them to talk about pain, and wonder why we can’t?” Aussie men aren’t that different. They’d choose an enema over traditional counselling approaches. Please don’t ask me how I feel! Men are more likely to suffer alexithymia – the inability to give expression to their soul’s truth. When I did my masters in counselling, it was not uncommon to be the only man in a class of 35 students. It would seem men don’t know how to talk about pain.

We have constructed a society based on the myth of redemptive violence and we have perpetrated ‘just war’ (the greatest oxymoron ever) on a global scale for millennia, state sanctioned for the past two centuries. We have sent hundreds of millions of men as lambs to the slaughter and have had few tools to help the survivors deal with the paralysing PTSD. Men bought into this myth because they believed this was the only way to protect women and children. Being male is not bad.

Our churches have supported just war with theology that teaches redemptive violence as how a male God’ dealt with his own pain, and thus how we should deal with ours. Punitively. There must be a victim. Our orthodoxy was at complete odds with Jesus’ orthopraxy. Even today I saw a meme on Facebook: “Christianity: Jesus got what you deserved.” Violence solves everything, apparently. I commend the work of Michael Hardin if you want to explore this further.

The scapegoating mechanism is pre-verbal, unconscious and universal, so we don’t see it, so we dismiss it – and then we reinforce it. French philosopher Rene Girard argues that this scapegoating mechanism is the cultural artefact that underpins all human cultures. Here’s how it starts: A child (let’s call him John) is playing with a toy, then loses interest, then another child (David) picks up the toy. John’s desire is triggered by the David’s interest, and what Girard calls mimetic rivalry begins – John mimics David’s desire. The rivalry escalates until someone wins – usually the stronger child. The weaker is scapegoated. Or, a carer steps in and scolds David to “learn to share” – and David licks his wounds and stifles his pain, stored for another day. When he will bring that pain back into circulation.

Are you still with me? This is why sound bites or scapegoating of males will not work. What does work is holding pain, processing pain, being transformed by pain. To take it out of circulation. To take it back to the loving cosmic Bank, so to speak, and stop thinking you can use it as legal currency.

I am not a perpetrator of family violence, beyond the rare smack in anger when my boys were young, and the withholding of love that hurting people do. I have hit walls and shouted. Mostly, I have perpetrated violence upon myself and reinforced the cycle of violence in the system. This is the silent majority of good men who know that violence is wrong yet withdraw into medicating their pain with addictions (especially porn), who shut themselves down with shame, anxiety and depression, because they hear the hue and cry against the male gender and do not have the tools to deal with their pain.

The tools of initiation, wisely held by wisdom elders, are the only starting point I know that enable violent men to become safe men. They take the ancient ways that the Tutsi men know and we have forgotten – to create spacious containers where pain is transformed. It takes great courage for a man to take his pain out of circulation, and engage on a journey of initiation.

Those old notes from our childhood aren’t much use anymore. May you give up trying to cash them in. May you find the resolve to take them out of circulation. May you find the wealth these notes hold for you beyond the cycle of violence. May we ache for a world where violence and scapegoating are seen as powerless and love is experienced as powerful.