Cave of the Heart 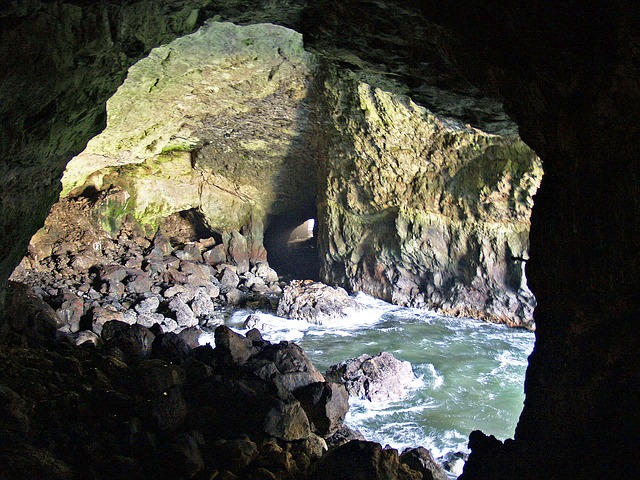 We are caves. Hidden. We don’t find these caves until a great crisis takes us there. I love caving. The gargantuan shapes. Foreboding depths. Cloying darkness. Pillars, patterns, crevasses. These underground passages have always called us. They were our original dwelling places (both the womb and the womb of humanity) and remain the place of initiation. The human chrysalis, where the self is done for, and the Self emerges.

In an age when everything that can be found has been, the world’s largest cave was recently discovered. It is over 150 metres high and wide and several kilometres long (nobody knows how long). At one point, light seeps in from over 300 metres above the cave floor. It remained hidden for so long because it lies buried beneath thick tropical jungle in a remote area of Vietnam. Google Earth reveals nothing. A local farmer stumbled across its entrance by accident. Locals would not go near, terrified of the roar of water that echoed from the vast limestone walls. Poisonous centipedes infest the region. So for millenia, and throughout the technology of the last 100 years (not to mention a war), it lay there, waiting. On discovery, stalagmites over 70 metres tall dwarfed explorers. The improbable dimensions of the cave led to gross over estimations of its size, for nothing like it has been seen, anywhere.

This discovery led me to some rich metaphor. The caverns of our underworld lie buried in a lifetime of defences that keep our conscious selves at bay, projecting fear and anger at anyone who threatens to go near these depths. Terror at the roar echoing from our shadow keeps us living safely in our heads, where everything is known, controlled. Where daylight keeps us alert and vigilant. But like the good Doctor’s means of transport, we are much bigger on the inside, and these depths are always calling.

“Deep calls to deep in the roar of your waterfalls; all your waves and breakers have swept over me.” (Ps 42:7, NIV)

“From deep in the realm of the dead I called for help,
and you listened to my cry.
You hurled me into the depths,
into the very heart of the seas,
and the currents swirled about me;
all your waves and breakers
swept over me.” (Jonah 2:2-3)

Carl Jung noted the importance of the cave, in our unconscious dream state, and its role in our formation. Tolkien too captured this, in The Lord of the Rings. Gandalf the Grey wrestles a great Balrog in the endless depths of the mines of Moria. A Balrog is a giant, ancient serpent of the deep cloaked in fire, shadow and darkness. So it is in darkness, before fire, our shadows dance and our caves give up creatures of mythological grandeur. But Gandalf the White emerged victorious. This victory was not marked by superior strength or towering stature, but by a calm, gentle demeanor. It was victory by defeat. He was undone, and fear, death and the need to battle were behind him. After a night of terrible darkness, another emerged with the same hobbled surrender:

“The sun was rising as Jacob left the place of pain and Jacob was limping because of the injury to his hip.” (Gen 32:31, NLT)

Without such transformation, we remain not much more than antiquated English police boxes, not much use to anyone and terribly cramped on the inside, where we live. But if we delve into our depths, great treasures emerge that tool us for whatever lies beyond. Unlike Gandalf, our depths need to be revisited again and again, where silence and solitude undo us once again, where we find deeper mysteries lurking beyond all knowing, where we utter groanings that words cannot express. Only then will we carve out enough room for God to dwell.