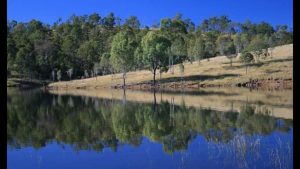 The wise bush teacher John Guy calls fire “cave man TV” and it is immediately apparent to anyone who has sat by a fire that the cave man had much higher definition, 4D (depth as well as heat) and a surround sound experience far beyond anything you can control with a remote.

The latest fad in suburban yards is as ancient as the dawn of civilisation. The fire pit. I’m planning one for the yard of the house we are currently renovating. In Brisbane, an inside fireplace is as appropriate as a bouncer at a nun’s funeral, but we put one in our current house because we like the ambience. Outside, their heat is not oppressive and their dance is mesmerising. I scanned my brain for a better word, but no, that’s the best description I have.

Over the past two decades, each winter I have taken my family (and more recently, my mates) to a farm near Guyra, which sits at 1,400m above sea level. Ponds freeze. Snow falls. One year, John the farmer spent months collecting dead wood into a mountain of fuel for a bonfire, the Godzilla of fires. On this particular night, the stars were needles piercing the frigid air. It was 14 degrees below zero. This particular corner of Australia is often the coldest place on the continent. But the fire was an inferno. We stood there being blistered with heat on one side and snap frozen on the other. So we assumed the rotisseried stance of constant gradual circular movement under our 5 layers of clothing. The blue/lemon light that flushed the base of the blaze is etched in my memory. Mesmerized.

Fire cooks, heats, sterilises, cauterises, illuminates, protects from predators, it clears land (native Australians shaped our entire flora using fire, regenerating forests and creating clearings for ritual and for hunting). Even today, it generates most of our electricity. Yes, burning carbon is changing our climate, and there are more efficient ways of heating than an open fire. yet it remains the most valuable tool we have been given. But it is as a contemplative device that it reveals its most potent gift.

Men are especially drawn to fire. It forms a centre, and men create the circle around it. It offers a safe focal point that is living, yet undefined, dangerous yet inviting, familiar yet wholly mysterious, a crackling flaring searing sizzling silence richer than words. It offers the left prefrontal cortex nothing to index, categorise, possess, control. It returns us to wisdom that our worlds have lost. Fire is a key metaphor for God, or God’s presence. Bushes that burn but are not consumed. Pillars of fire at night. Tongues of fire on people’s heads. Something experienced but never explained, never colonised. Is it possible, then, that the fire offers us a balm for our freneticism that might be an antidote to depression?

An initiated man’s wife recently lost her uncle (affectionately named Sir Don) after a short illness. A couple of years ago, he sent the following musings to her and I tucked it away. His death last month prompted me to share it. He never met me, but the wisdom he found is something so profound yet simultaneously so simple. Unedited, he wrote:

“I have been blessed, or have I? I often see Facebook posts asking us to support those who face the black dog’s terrors and feel somewhat helpless to support them, except to be there for them if asked. Or probably, more importantly, to just be there as a caring human being without any kerfuffle. My mother was on anti-depressants for most of her life and at one stage was subjected to horrible shock treatment during a breakdown. My younger brother Ian committed suicide in his early fifties. My auntie, uncle and cousin on my mother’s side also took their own lives. My only son Tim was killed in a motorcycle accident at 17 years of age. So it isn’t as if I haven’t been predisposed to suffer the ravages of depression. However I can honestly say I have never felt depressed throughout my 68 years of life. Horribly sad at times; yes.

“I am not offering the following as a panacea and have absolutely no professional knowledge as to the treatment of mental illness, but I rarely see what I think has kept me sane proffered as an aid to handling life’s hardships. As a child I always sought solitude and even often wagged school just be alone in the bush observing nature. I was punished for it with the cane many times but persevered. Throughout my life I have followed the same pattern: bushwalking, surfing, sailboarding, fishing, camping, motorcycling alone, observing and photographing nature in all her intricacies, including countless beautiful sunrises, multi-coloured sunsets, wild storms, eerie clouds etc etc.

“But I think the greatest calming effect on my life has been sitting for countless hours beside billy fires, watching the flickering flames and breathing the wafting eucalyptus smoke. It is in these times of contemplation and inspiration that our minds are free to roam, absolved from life’s hardships. I personally think that at these times we spiritually connect with our ancestral forebears, way back to our caveman genes. Muses speak with us and offer ideas for us to write down to release pent-up emotions. Hence my Spirax notebook always nestled in my pocket. This allows our minds to relax and be free for a while. Simplistic? Maybe, but often we complicate things too much.

“So that is my take. It may help some, or none. But is has helped me today because I have written it down.”

(an amusing aside: lighting a fire with Redhead matches frustrated Sir Don so much that he wrote to the company complaining of the quality of the wood used in their matchsticks).

The photo above is a gully on the shores of a lake that Sir Don rented from a local farmer so he could simply sit, light his fire and heat his billy, and contemplate the great mystery of being human. A wise sage, I say.