Boxing Day: An ancient rite of passage for boys 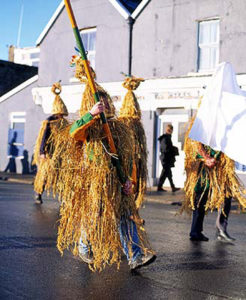 One our traditions around Christmas was birthed as a rite of passage for boys and men. It harks back to the celts and a time when myth embraced all of life.

Christmas wasn’t even on the radar of the church for the first 500 years. It was not until people who relied on the sun – at first this was the Celts – that Christmas became a thing. In the Western church, this did not occur until Francis some 700 years later, then ultimately brought into mainstream society through Martin Luther, who placed lights in trees to remind us of life amidst seeming death, light within great darkness.

The winter solstice was met with the longing for rebirth of the sun; the ancients believed in an interdependent universe where our actions were linked with the created realm. If the sun does not come again, we will perish. These early pilgrims resonated with this story; the first chapter of the Gospel of John unites the first incarnation, of God pouring Godself into the material world expressed as Word (the first incarnation), and the second – that Word becoming human, as a validation and full embrace of the first incarnation.

The early missionaries to the Celts recognised the Celtic understanding of an interconnected universe and a kinship with creation, and deepened the meaning the myths by replacing the Sun with the Son. God is always bringing Christ into the world, over and over, and with every barren, dark winter comes the longing in the human soul, placed there by God, for rebirth, for the beginning again of the new. Despair is the point of birth, like a jeweller rolling diamonds out over black velvet.

The Celts had a rite to express this rebirth that was essential for boys to become men. A myth that originated in Ireland tells of how the Creator wanted to determine who was king of all the birds. The bird that flew highest and furthest would win. As the birds dropped out, only the eagle was left. Eventually, the eagle fell and a wren emerged from beneath its wing to soar higher and further than all others. This possibly stemmed from the lone song of the wren through the deadly quiet winter. It calls forth life even when there seemed to no hope for it.

Hungarian anthropologist Geza Roheim discovered that a man holding a wren on a pole or in his hand is the symbol of the phallus; the large and muscular eagle hides the small but resilient wren that “soars” in any season. Similarly, in her book “Hunting the Wren” Elizabeth Atwood Lawrence notes that the robin, so often associated with the wren, means phallis in Cornish, and feather in Latin is penna, a possible etymology with penis.

So on December 26 each year, the first day when the naked eye could discern the return of the sun, elders would take boys into the forest to find a wren. They would pursue this wren and kill it and bring it into the village on a pole, and the community would celebrate. The boys would see this beautiful, fragile bird having shed its own blood as a sign of new life. They would know life is hard, and they are going to die.

In Adam’s Return, Richard Rohr wrote that when a woman bleeds, she connects suffering with new life. She is already connected to the great mystery. But when a man experiences orgasm as delight and does not suffer, he has no native awareness of the suffering required to steward life in this world; from parenting his offspring to caring for the entire ecosystem. By killing this beautiful small bird, the boy learns to connect his libido, the source of life within him, to suffering and responsibility, and generativity, the stewarding of life into future generations. The little wren’s death was a form of circumcision for the boy.

However, the early Christians saw the scapegoat mechanism at work in the bloody destruction of the beautiful wren to appease the people’s guilt. Yes, there must be shedding of metaphorical blood, but there is no need for one to sacrifice for the sins of others. This was ended with the death of the ultimate scapegoat, Jesus. Circumcision is of the heart, not the body, to quote the Apostle Paul.

So these clever missionaries deepened this ritual beyond the material world by making the wren a symbol of the first martyr, Stephen. He served others, and his death is a reminder of the life-giving nature of a man who died before he died, who gave his life away as a blessing to others and to God. These men and boys now dress up as wrens and sing and dance for their community (like the wren’s song in the dark of winter), promising new life to come and collect for the poor. Surplus possessions were boxed (Boxing Day) and given away. And so we have, as the carol Good King Wenceslas says, the Feast of Stephen.

To be life-giving is the essence of elderhood. Perhaps instead of making Boxing Day and the days following only about the sales and the cricket, there might be someone in some kind of social poverty that you might connect with (it might be yourself in exhaustion!), or a family member with whom you can spend time supporting. This time is both the hardest and most blessed time for us, shoulder to shoulder, Our woundedness is a gift to this world, when surrendered. To use our libidinal energy to engage in mercy and grace is to make our lives not about us, but to make ourselves about life.