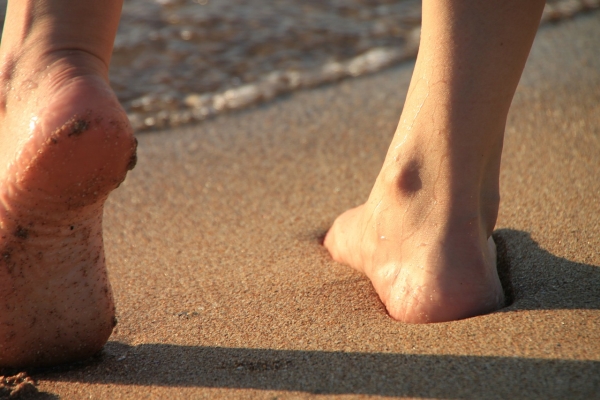 When my wife’s older siblings started school, they were allowed to go barefoot. Barefoot sounds primitive (or at least Hobbit-like) and terribly unsophisticated to my Sydney North Shore upbringing. I was in shoes before I could walk. My father did not own a shirt without collars and wore a tie on weekends if he left the house. I was quite sure the minister of the church we attended went to the beach (if one ever did such a carnal thing) in a suit. Barefoot, well that was positively primitive. Ghastly, to quote a particular royal.

It’s the way of things, to concrete over, to pave paradise as Joni Mitchell satirically laughed. To find some way, any way, to distance ourselves from the ground beneath us. It was once believed that hell was under the ground, and Heaven above us, so the less we were connected with the earth, the more advanced (seemingly in control of our destinies) we felt we had become. Perhaps such superstition still pervades our societies.

Oh, silly fools we are. Humans, from the root humus, earth. Dirt. The Hebrew for Adam literally means red, of the earth. We are that dirty stuff. No matter how much Solvol we use to scrub ourselves clean, we are clay, and I think that’s not a bad thing. I think it’s a truly good thing. It (excuse the pun) grounds us. “Out, damned spot! out, I say!” cried Lady Macbeth, but that damned spot is through us to the core. Dust to dust, dooms the celebrant, as the body is lowered into the abyss.

Perhaps it is a surprise to find that immediate skin contact with soil helps enrich emotional health. Gardening is one of the most therapeutic acts we can engage in: The vitamin D from the sun; the gentle exercise for our bodies; and the natural light for our melatonin that maintains our circadian sleep rhythms, all these calm us. Just turning over the soil and helping bring things to life is a meditative process that releases our anxious thinking, the thinking that is tied to doing, not being.

This is not, as you might think, some new age nonsense. It has a scientific basis. Mycobacterium vaccae, a bacteria found in soil, triggers the release of seratonin, which enhances mood and relieves depression and anxiety. Mary O’Brien, an oncologist at the Royal Marsden Hospital in London, was treating lung cancer patients with this bacteria, commonly known as M. vaccae (pron. emm vah-kay), to see if it improved their condition. It did, but the surprise was an improvement in energy, outlook and cognitive function. So Dr. Chris Lowry at Bristol University researched further, hypothesizing that an immune response to the introduction of the bacteria triggered the increase in seratonin. He was right! Germs are good! Mum’s scrubbing was unnecessary. We are made of this stuff, that’s how we have always been, for countless millennia agrarian in nature. Now that food comes from a supermarket from a factory from a feedlot or a laboratory, the soil is stripped from our lives and we are promised the utopia of an antibacterial universe. Silly us (you can read more about it in this article in The Economist – http://www.economist.com/node/8956457?story_id=8956457).

Another soil-born bacteria, actinomycetes, combines with moisture from rain to release petrichor, that beautiful fragrance that permeates the air after rain. Why beautiful? Why not revolting? Because we belong to this stuff below our feet. It is not only our destination, it is us.

St Francis and his followers went barefoot everywhere. Always.The order of the Friars Minor still carry this tradition today. It was in part an identification with the poor, but it was in equal part an identification with the earth, and all it contains. It was, as I have said elsewhere, to declare a kinship with creation, something relationally far deeper than the concept of stewardship. It is to declare all that humanity calls bad, good. It is to turn upside down the societal order. It is to restore humanity to its humus, as healthy, wise, welcoming, where everything belongs.

Which takes me to “the full extent of his love.” When Jesus took off his outer garment, bent down and started washing dung off the feet of his friends, he became unclean. He became the very stuff he was removing. He was modelling the Dream, the Kingdom, the True Perspective of Reality, to his closest followers. To them, he was humiliating himself, becoming something vile, disgusting. This dualistic good/bad divide goes back to the tree of the knowledge of good and evil, and in this simple, profoundly humble act, he brought the earth back to the earthlings. He did not come to bring Heaven. They (and all of us, it seems) clamour for the heights, for purity, divinity, perfection. He came from those heights to show it was the other way round. The dirt one (literally, the son of humanity, his only self-appointed title) embraced what makes us recoil, through to the cross, to the tomb. Ironic that decay did not come to the one who embraced it, but comes to all who seek to avoid it. Science keeps proving ancient wisdom.

In men’s work, when men are going to become serious about their journey, we get them to take off their shoes. The work is done on the ground, with nothing underneath them. No man walks on holy ground unless he is barefoot. Not Moses, and certainly not me. Do not call unclean what I call holy, the maker would say throughout all ages.

The great irony of this blog is that my family, back several generations, built an empire selling shoes, not unlike Francis’ father, who was a wealthy textile merchant in Asisi. What delicious irony!

I recently took a vacation. I did not take closed in shoes, and and for the majority of the time, I was barefoot. I felt the ground. I let it embrace me and undo the tangles within. I envy the Franciscan way. I want to go barefoot, but it seems the world is not ready for it. But I’m starting to think a shoes off day is not a bad idea. To bring our collective redness, our clay pots, together in solidarity of our glorious brokeness. Anyone want to join me?