An Evening with Jill and Terry Frisbie 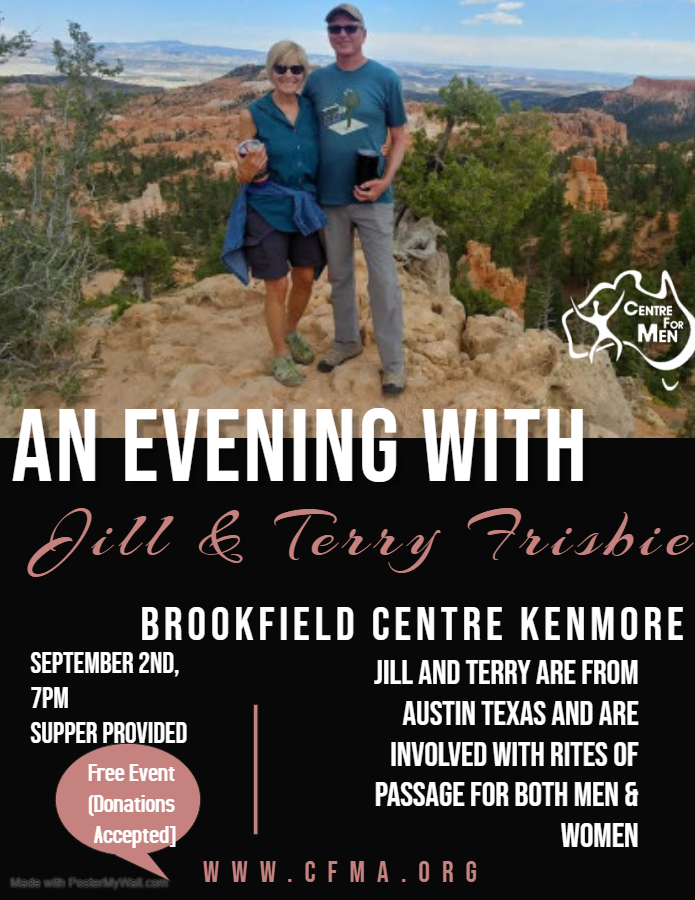 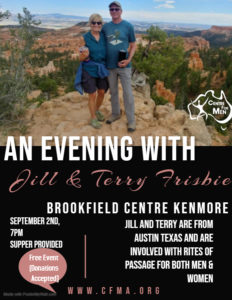 Terry did his MROP in 2001 at Ghost Ranch in New Mexico. He has been involved in doing men’s work ever since. “I went home from Ghost Ranch enlivened and energized but there was no place to plug into anything remotely like my MROP experience. Within 6 months I planned and carried out a rites of passage for 23 boys, 13-17 yrs old, from a local program that helped at-risk kids stay in school.”

He was invited to work the 2004 MROP at Ghost Ranch that was led by Richard Rohr and Stephen Picha before being tasked with being the first Convener of the Texas Chapter. He planned and oversaw their first MROP in 2007 also led by Richard and Stephen. “I received excellent training and support on being an “initiating guide” and have participated as overall Coordinator on 7 MROPs. What a rare and special opportunity this has been. I believe there is an inner “initiating guide” in each of us that’s been held in the collective unconscious for milenia and can be accessed during rites of passage by anyone who allows their true self to embody it.”

Terry sits on the Wisdom Elder Council of Illuman and the last 2 years has held the role of Convener of Conveners. His life journey has contributed to his being a man of strength and peace. This year he celebrated 40 years of sobriety and is active in 12 Step recovery. He is at-home in the wilderness with 50 years of backpacking and 25 years of chasing whitewater and canoe tripping in remote places.

He is a generative man who creates peace in the people he works with. In 2012 he created Wilderness Dance, a business that guides people into the wilderness for transformative vision quest experiences. “I wanted to do something that drew on my love of wild places and allowed me to share many of the gifts I have received throughout the years of doing MROPs and men’s work.”

Jill went through her Women’s Rites of Passage in 2000 at Ghost Ranch, New Mexico led by Paula D’Arcy. Although transformative there was no place to connect with other women who shared a similar experience. She found ways to work with other women that were on similar spiritual paths. Jill has 27 years of recovery and service in 12 Step programs and is passionate about lifting others up in all areas of her life, not the least of which is her occupation as a Physical Therapist.

Having done her first spiritual retreat with Paula D’Arcy in 1994 Jill continued to stay close to Paula’s retreat work and books. In 2011 after attending one of Paula’s retreats, Terry and Jill returned home knowing that they had arrived at a new frontier in life and moved to Austin, Tx. The next year Paula, with the help of Jill and 2 other wise women, began leading Women’s Rites of Passage two times a year in North Carolina.

Just like her experience in 2000 the WROP has been transformative for the women who participated but there was no outlet to connect. For the past four years Jill has organized and hosted a quarterly WROP gathering for women who have participated or are interested in participating in a WROP. Particular attention is paid to sacred ritual and Jill is considered a Ritual Elder in women’s work. These gatherings offer women the chance to reconnect with their transformative experience and to support one another in their shared journey.

Jill loves adventure and being in beautiful and wild places. She has been one of the guides, along with Terry and Stephen Gambill, on the Wilderness Dance Vision Quest Experience since 2012. Together they have led 7 Vision Quests, most recently in June in the mountains of Colorado. Jill is a strong and caring woman passionate about everything she does. She has been able to help many women who thought they could not do a vision quest to accomplish their goal of doing one.